It’s been six years since LadyNerd original flavour. My solo debut. And five years to the day-ish since its Edinburgh Fringe run. 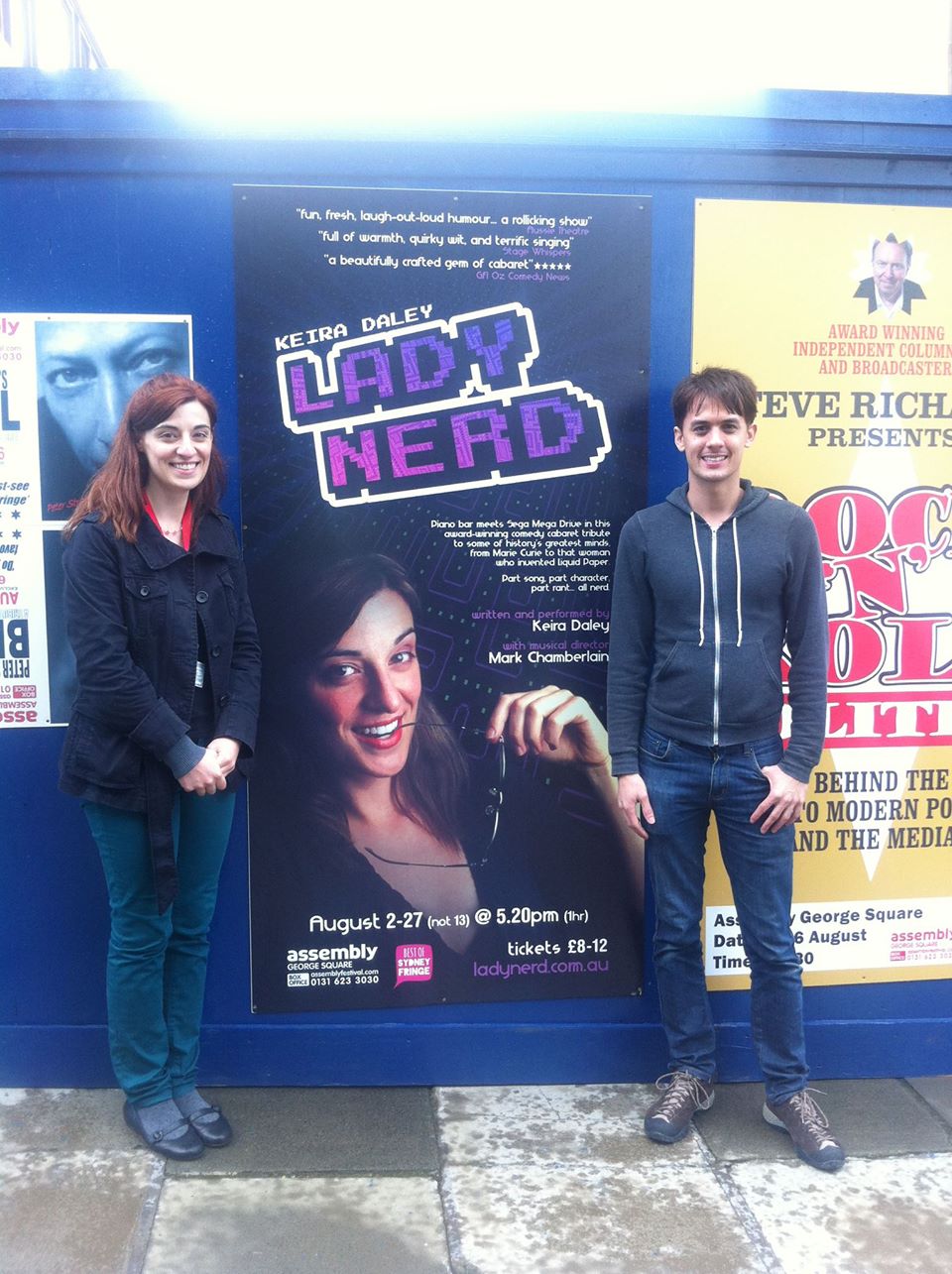 Look at us! So cold in midsummer Scotland! We were so young and full of hope!

The things that compelled me to write LadyNerd (nerdrage at a general dumbing-down in society) seem trivial in contrast to what the world’s become since (one in which “alternative facts” are part of the global political discourse). What do you even do with that?

My reaction to that, and many other things in life, frankly, was “bury myself in video games”. It sounds a bit sad (and I guess it kind of is?), but play the right game and you can get that rare feeling – the one I used to get before I “got older” – that you can achieve anything. 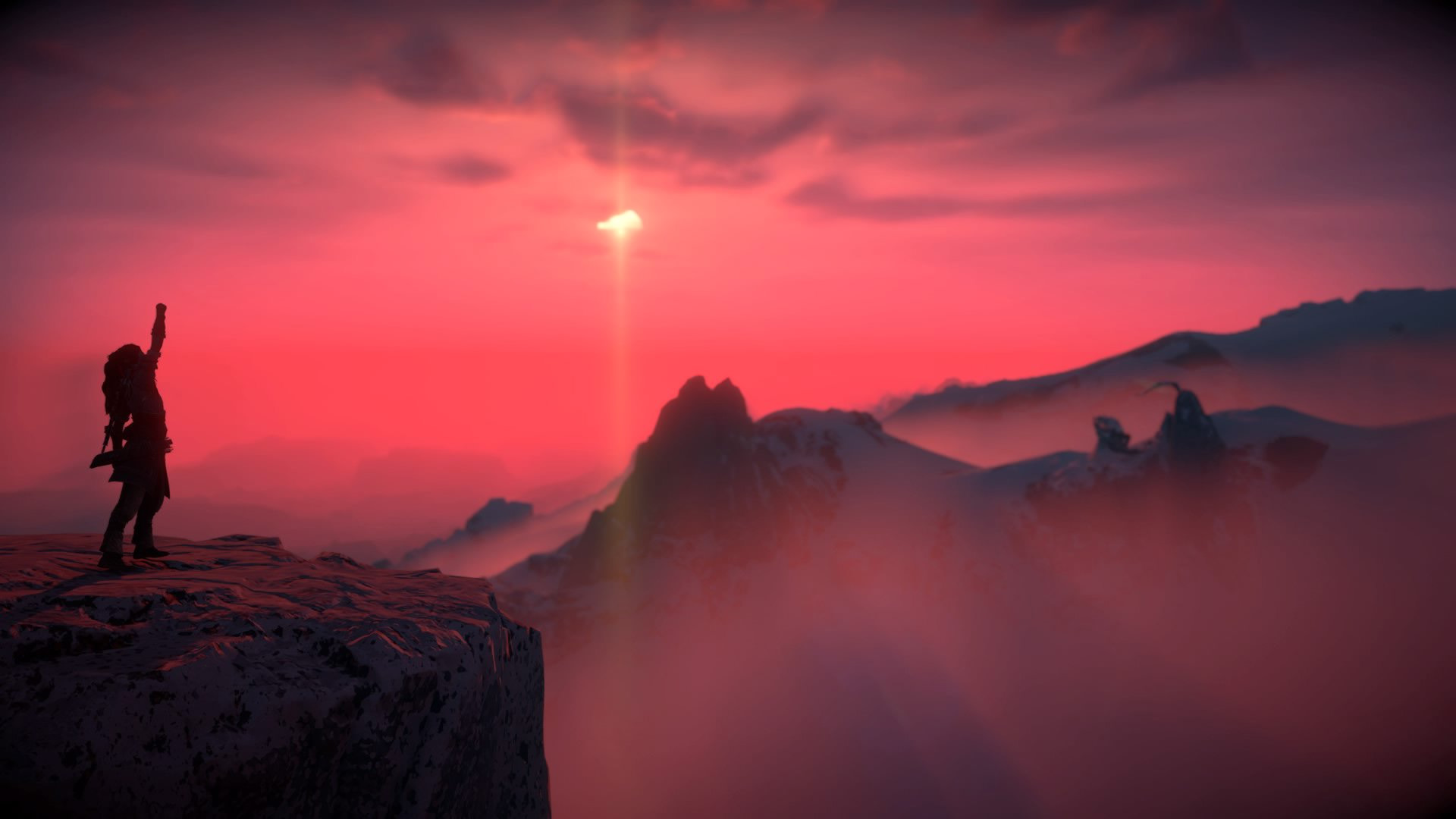 There have been moments in games where I have punched the air in triumph. Moments that made me so very emotional, even the next day. Moments I chuckled at in glee at how bold and great the player character was. Moments that made me wish I could be as brave and extraordinary (or, like, fucking climb a cliff like a boss).

I started to wonder… what if I could bring even a hint of that feeling into a theatre? A show where some of the narrative ownership is in the audience’s hands. One where art and science smash together in real time. One with a true sense of adventure.

One where I’d have to do more research, dig deeper, and really, really put my burgeoning songwriting to the test.

One where we could all shout and throw things like kids at a panto for a little while.

And if it was going to capture the feeling of a game, why not just… make it a game?

Then I got muso Mark Chamberlain on board and another question arose: what if we built a virtual band to accompany us? You know, because all the other fucken shit wasn’t enough to do.

Bit by bit, mile by mile

LadyNerd 2: Game of Nerds is the result of six months of research and songwriting, but just six (mad and ridiculous) weeks of writing, orchestrating, audio production, and coding. Yes, I had to teach myself to baby-code on Twine in order to build a non-linear script. Of course, the tech operators refused to use the digital edition in favour of the print one and, suspecting this would happen, I also built a tabbed choose-your-own-adventure-style hardcopy version – lo-tech, but just as labour intensive.

Why only six w 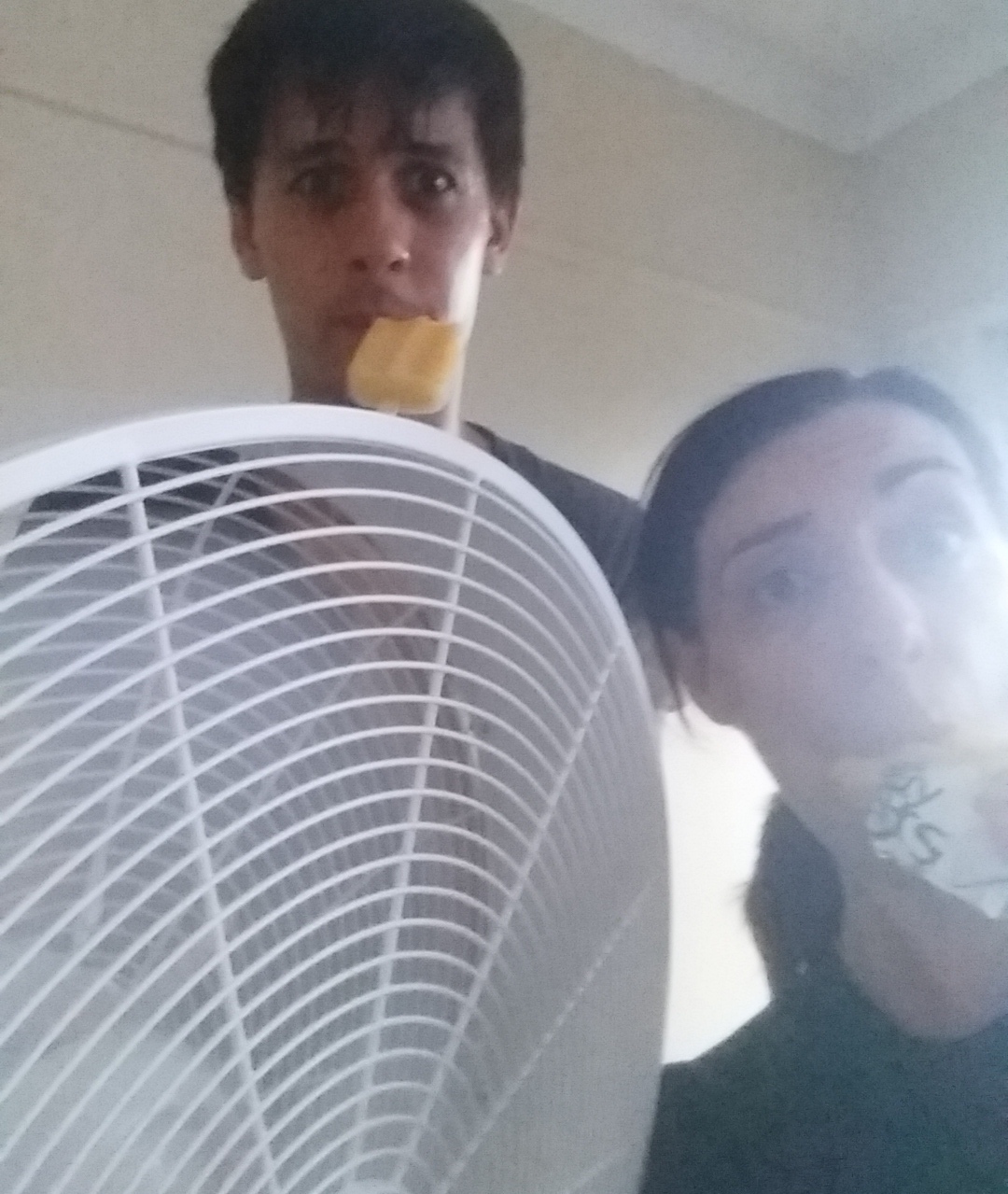 eeks? Our schedules meant we had to start January 2, 2017, and get it together for Perth Fringe World by February 15. Sydneysiders may recall some of the hottest days in recent history happened in that time frame – which is, of course, the perfect time to be inside trying to record backing vocals with the fan off.

I don’t know how we did it. It was like cramming for an exam – you push yourself to the point of shaking gray husk, power through the test after moving feebly through everything else in life for weeks, then? You forget everything.

Spoiler: it took a toll. Definitely on my health – my bloodwork showed I had glandular fever, except that was over a decade ago (had I tripped into a time portal where I was back listening to Radiohead on repeat and walking out on my stuttering World History 3001 lecturer to go eat gelato at Coogee?). Once in the lead-up to this show, I even wound up in the ED. 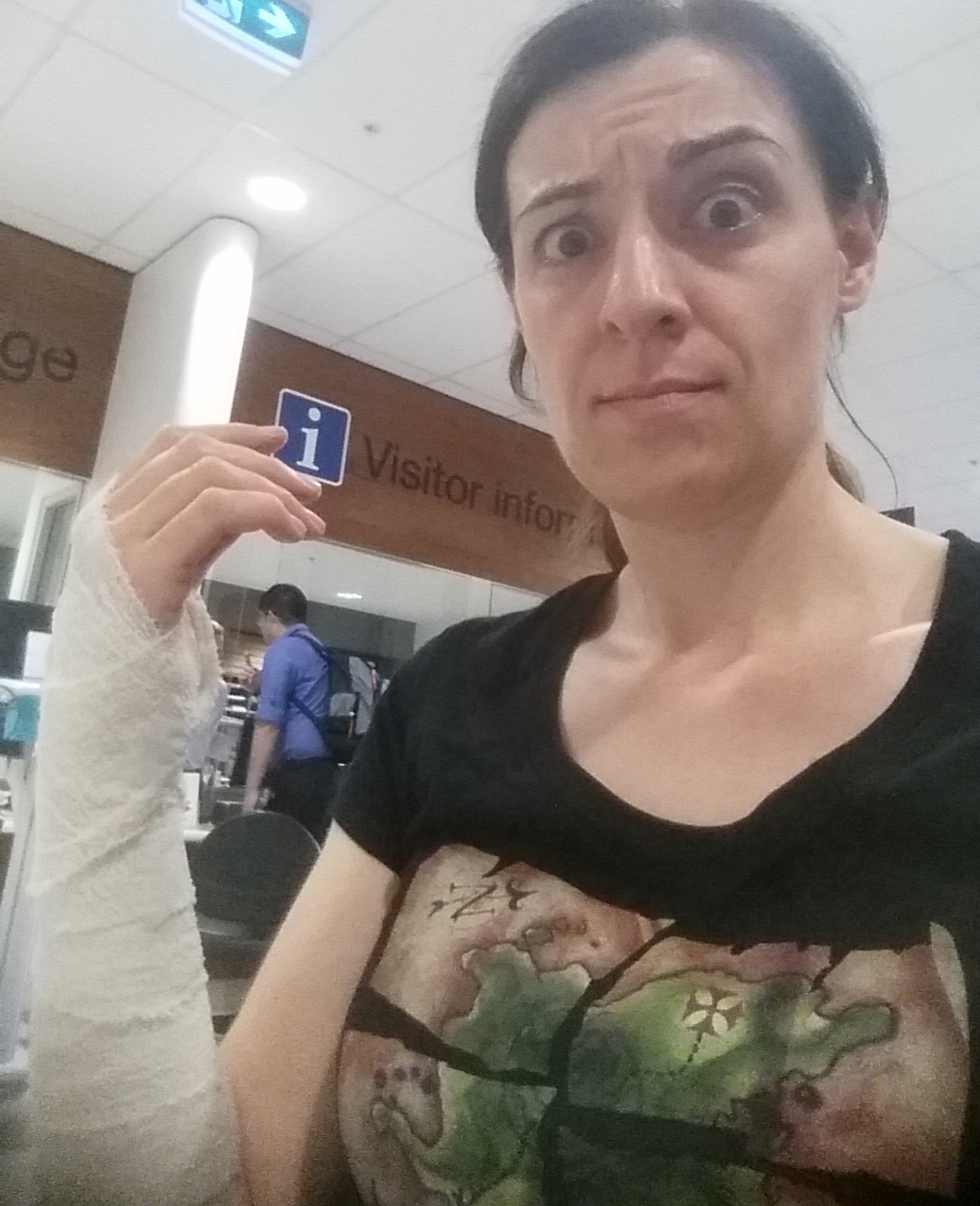 Sure, it was for a mystery insect bite, but the fact remains. I say ‘fact’ here with no alternative, unless you can ask the insect for its account (unidentified arthropod claims: “I didn’t inhale”).

In cases like these, I normally ask “Why do I do this to myself?” but for this show, I didn’t think twice. Rightly or wrongly, I needed to do it. The excellent news now is, it’s done. I don’t need to build anything – just make it more betterer in time for the hometown crowd.

LadyNerd 2 is fuelled by: rage, feminist rage, nerd rage, video game love, inept adulting, and OMG facts. Once I started researching again, like the good ol’ days of LadyNerd original flavour, I felt supercharged by the slew of amazing new stories I found.

Like Katherine Johnson – whose story I read up about before the amazing Hidden Figures movie was released (I have been asked) – a black woman who worked at NASA as a mathematician for 30 years, starting in the 1950s. Her brilliant mind could not be repressed despite society’s (and life’s) every attempt to do so. Hers is also a story about how a network of wonderful people can help you beat the odds. This includes her two wonderful, clever parents and several teachers who were gunning for her to succeed. One in particular was the (outrageously handsome… ahem, sorry, totes profesh) Dr WW Schieffelin Claytor, whose own story is well worth looking up.

Caroline Herschel is another whose life really struck me. The odds were against her from the start – she was a sickly child whose mother pretty much decided her fate for her. Caroline was to be her mother’s maid, end of story. Except it wasn’t. She went on to discover eight comets and catalogue the cosmos.

And at the request of several audients (that’s not a word, but custom nomenclature is all the rage now) along the original LadyNerd journey, I had to include Rosalind Franklin. Hers is a tricky story to unravel, but in the end her skill and contribution cannot be denied any more than the role misogyny played in trying to dampen it.

There are others, including many I couldn’t fit into the show. The point is, you don’t have to look to fantasy like video games to find heroines. There are plenty right here, doing hard shit every day and changing the world, bit by bit. Most go without fanfare. But they don’t have to. We can celebrate them. LadyNerd is my tiny dent in that universe – and LadyNerd 2: Game of Nerds lets us kick that dent in together.

And if you don’t like it, you still get to throw things at me. In this game, everyone’s a winner.

You can catch LadyNerd 2: Game of Nerds at 7pm September 13-16 at Old 505 Theatre (5 Eliza St Newtown) as part of Sydney Fringe. Visit the festival website to grab tickets or read more right here.