Memories from the ‘burgh

LadyNerd is on the way to Edinburgh Fringe 2012.  That means the incomparable ninjamazing music nerd, Mark Chamberlain, and that weirdo with the dancing eyebrows who occasionally writes about herself in third person, Keira Daley, are going to do their thing for the world’s largest arts festival in just a matter of weeks.

I performed at Edinburgh Fringe three years ago and, in the lead up to my solo debut there, I’ve been recalling the weird and wonderful things that await, and anticipating the surprises in store.

Just yesterday I found a business card (I keep pretty much every business card I’m given in a small cardboard treasure-chest-shaped box I’ve had since 1996) which took me right back to Edinburgh Fringe 2009.  The card – black ink on thin mottled white cardboard – says the person’s name and title:

This is accompanied by, presumably, his home address (in Ireland) and picture of a clapperboard.  Because we all know what that means.

Let me explain how I wound up with this piece of quality memorabilia. 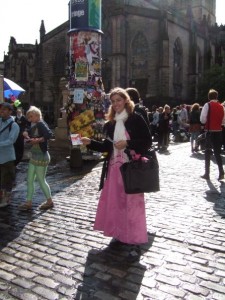 It was morning out on the Royal Mile early on in the Fringe – before we all realised that flyering before midday was a waste of time.  I was with my flyering buddy for that day, and we were in costume.  The show was Princess Cabaret – a musical sketch comedy that gave a messed-up twist to classic fairytales – and I was Sleeping Beauty.

We were approached by a man who seemed interested in what we had to say, which is good when you’re trying to sell people a show.  So we were friendly and chatty and didn’t immediately realise he was just waiting so he could tell us conspiracy theories and peer into our souls because he had special powers.  Or something.  It was weird and a little creepy and I don’t remember the details exactly because he was kind of mean to me in particular.  He saw something dark in my aura.  I think they call it logic.

So imagine our surprise when we were accosted by a second colourful character before the clock had even struck twelve.  A muscular man, fair-skinned, with long dark hair in a long dark plait down his back, who was roughly 5’3″, began a flirtatious conversation with us.  Again, being out for one thing – SELLING OUR SHOW, OH PLEASE BUY TICKETS – we responded with friendliness where perhaps a more discerning state of mind would have yielded a “Shut it down” response.

And there it was – “adult entertainer”.  He had one thing right – we were entertained. 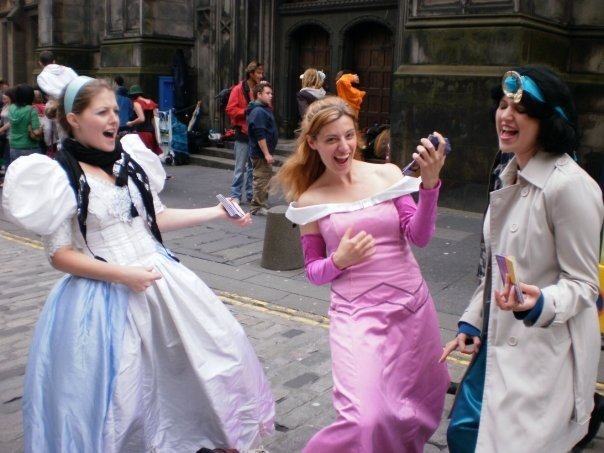 Just to complete the story, in case the ending were not obvious, he bought all 150 tickets to that evening’s show and we did a special “private” performance…

So I guess the moral of this story is, don’t trust flyerers on anything other than the show they’re selling – they may humour your flirting, they may listen to your conspiracy theories, but in the end they are there to sell.  As well they should be.  If you’re not interested in buying, maybe avoid those two blocks during August between midday and 6pm.

If you genuinely want to woo a flyerer, go see the damn show.  Nothing says “I care” like shelling out the price of admission.

And finally, if you want to promote your stripping career at the Edinburgh Fringe, do what The Chippendales did at the Gilded Balloon that same year and do a hilarious comedy show.

That was a comedy, right?

*holy freakin’ no, we really won’t