It was an absolute thrill and privilege to interview the 2018 Australian of the Year, quantum physicist Professor Michelle Simmons. Here’s my story and the video I co-produced with CBA TV.

Australian Of The Year Professor Michelle Simmons: Make It Your World

There’s a great thrill in defying expectations and carving out your own path, says the world-renowned quantum physicist and 2018 Australian of the Year. And when it comes to choosing a career, she adds, challenging yourself is vital. 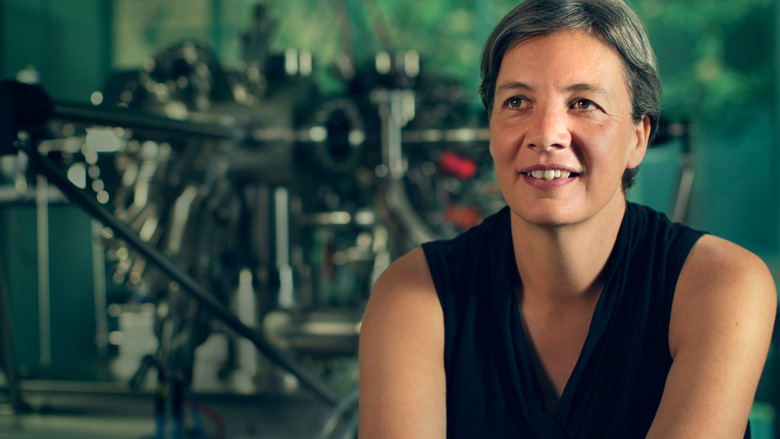 It was her older brother Gary’s pride and joy: a ZX81. A fragile machine of the early eighties, so much as opening a door nearby would rattle its cables and make it crash. For that reason, Michelle was “banned” from going anywhere near it.

“I was not allowed to touch the ZX81!” she says with a laugh. “For a while, ironically, it put me off computers, because I felt like it wasn’t my world.”

Eventually, of course, Michelle would make it her world.

The 2018 Australian of the Year is the Director of the Centre for Quantum Computation and Communication Technology (CQC2T) at the University of New South Wales (UNSW) in Sydney. There, she and her team are undertaking world-leading research in the field of quantum computing, building electronic devices at the atomic scale.

“Instead of performing calculations one after the other like a conventional computer, a quantum computer works in parallel, looking at all the possible outcomes at the same time,” Michelle explained in her 2017 Australia Day address.

As a result, the quantum computer will process in minutes what would take a conventional computer thousands of years. That speed brings endless possibilities, with revolutions in weather forecasting, air travel, artificial intelligence, and medical treatments among them.

For these reasons, the worldwide push to build the first quantum computer has been dubbed the “space race of the computing era”. And Michelle stands at the forefront.

“The harder the challenge, the more joy I got out of it,” she says of her life as a student. “I came to enjoy the beauty of quantum physics, realising there was something very deep there that was very difficult to understand.”

Michelle first noticed her penchant for challenges at age eight. For a couple of years, she’d been watching her father and brother play chess. Wanting a turn, she asked her father if she could play.

Twenty-five minutes later, to her father’s shock, Michelle checkmated him.

“It was a moment where somebody very close to me didn’t expect that I could do something,” she recalls. “And that’s fired up something in me throughout my life.”

The joy of defying expectations

There’s a spark of defiance about Michelle. But it’s an exuberant kind – a mischievous delight in achieving the unexpected.

“A lot of people think that being a woman in a man’s world is a negative thing,” says Michelle of her male-dominated field. “It’s actually been incredibly beneficial because people haven’t expected much of me so I’ve been able to just get on with it.

“Every time I do things and people are surprised, it actually gives me positive energy because I think ‘Oh, they’re surprised by that – let’s see what else I can do.’”

The “what else” in that equation includes being one of only two students at her “rough” south-east London high school to pass their final exams, completing a double degree in physics and chemistry and a PhD in physics, taking up a postdoctoral position at Cambridge, and earning the opportunity in 1999 to move to Australia and become a founding member of UNSW’s pioneering CQC2T team. And there she stayed, becoming an Australian citizen in 2007.

Among other achievements, Michelle and her team at UNSW built the world’s first single-atom transistor and the narrowest-ever conducting wires, at just four atoms wide, in 2012.

“Fifty per cent of the population is female, but only five per cent is in the field that I’m in. I’m pretty sure that if we got that number up it would be very good for the field.”

Despite winning the CSIRO Eureka Prize for Leadership in Science in 2015, Michelle took a while to see herself as a leader at all.

The first time she’d even considered it was in her late twenties when a personality test called her ‘a benevolent leader’. “I remember looking at it thinking ‘Well, that’s wrong. I’m not a leader.’”

Then she realised that very belief had been holding her back. And it was up to her to change it.

“I do remember being in many meetings thinking, ‘Gosh, why don’t we just do this? Why is everyone not getting to that point?’ Then suddenly realising I’ve got to take the reins and get on with it.”

That need to “get on with it” harks back to another great woman of science.

“Life is not easy for any of us. But what of that? We must have perseverance and above all confidence in ourselves,” said twice Nobel Prize-winner Marie Curie who, like Michelle, did degrees in physics and chemistry.

Another staunch advocate for understanding the world and solving its toughest problems, Marie also said that “progress was neither swift nor easy”.

For Michelle, making progress that will be useful for people, however hard it is to do, brings the greatest rewards.

“When you’ve done something very difficult and you finally solve it – or you realise you’ve got a piece of information, no matter how small it is, that maybe nobody else has quite understood in the world – it’s just a phenomenal feeling. And every day, that really drives me.”

“I would encourage everyone to choose something that’s challenging for you. Because if you’re challenging yourself, you’re learning about yourself and you’re learning new things,” Michelle advises. “If you take on those hard subjects, you open up the possibilities for your career… There’s no one job. You open many, many doors.”

2. Build skills to define your career

For young people considering their futures, Michelle suggests taking a broad view, looking out for all the different skill sets they can develop. “Pick up all the skills that you know that you like and enjoy, and that will help define the career path that you take,” she says.

“It doesn’t matter if you’re creating a painting or a piece of music or an electronic device, which is what I’m doing, but creating things, creating technology, building things, is fundamental. That’s where you’re really learning and thinking in a diverse way.”

“I see danger in having mentors and role models because then you start to be defined by what you think they are rather than what you should be. I think everyone should define themselves by exactly what they want.”

5. Pick what you love and go for it

“You only have one life, you only have limited time, you’ve got to choose the things you really love because those are the things you’re likely to be successful in,” Michelle says. “There is a sense of really finding out your own path and what you think you want to do, and then just absolutely going for it.”